During an idle week for Oregon cross country, the Ducks are still sitting near the top of the USATFCCA poll released on Tuesday. Now, the "countable" season begins with the Battle of Beantown.

Share All sharing options for: Ducks remain in top 3 of latest USATFCCA poll, ready for Friday's Battle of Beantown

The Ducks spent their off-week at Sunriver, an annual trek filled with plenty of tough workouts to prepare for the season ahead. As they did not race, the Men of Oregon held steady at No. 3 while the women remained at No. 2.

On the women's side, the Ducks are sandwiched between the two Michigan schools as the Wolverines are No. 1 and the Spartans are No. 3. Michigan State won the Dellinger Invitational at the beginning of the month, while Oregon took third in the race as they did not run their top squad. The Spartans trail the Ducks by just one point in the rankings. The top 13 teams held steady from last week. 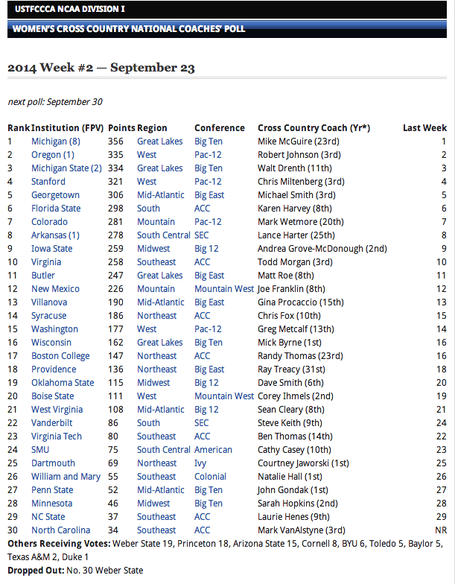 On the men's side, the top 12 teams held their positions from the previous week. Colorado tops the rankings, followed by Northern Arizona, Oregon, Oklahoma State and Stanford. 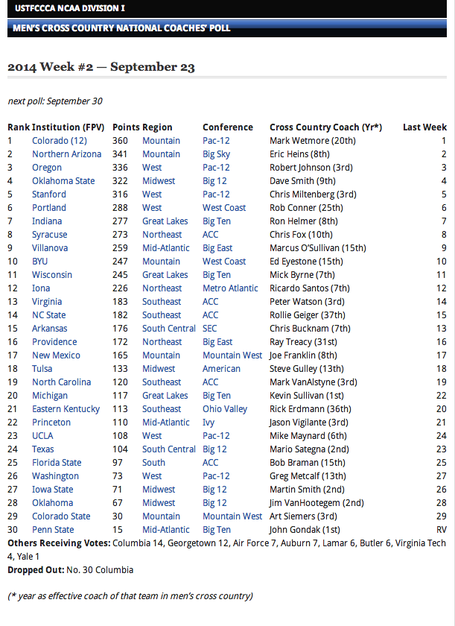 Expect some shake-up to come in next week's poll as today marks the beginning of the "countable" season. Essentially, that means any meets before today were more like exhibitions and now the meets will count towards at-large eligibility for the NCAA championships in November. There is a complicated and lengthy process to determine the at-large teams. You thought the BCS was complex? Child, please. That was nothing compared to the mess in cross country. If you're head is clear and ready to learn the complex system, Dennis Young from USTFCCCA compares it to trying to get into a club.

The Men of Oregon kick off their countable season today with the Battle of Beantown at Franklin Park in Boston. Oregon's stiffest competition will come from No. 8 Syracuse and No. 16 Providence. Edward Cheserek will be looking for his fifth straight win on the cross country circuit after winning the final three meets of last season (including the NCAA Championship) and the Dellinger Invitational earlier this month. Cheserek will also be looking to defend his Battle of Beantown title from last season.

The United States has officially submitted their bid for the 2019 IAAF World Championships with Hayward Field as the proposed site. As the World Championships are basically the equivalent of the Olympics in track & field, this would be the biggest track meet hosted on US soil since the 1996 Olympics in Atlanta. Eugene is up against two other cities (Barcelona, Spain and Doha, Qatar) to host the meet. Site visits will happen next month with a final decision coming on November 18 after each city has made a presentation.