Michigan State vs. Oregon: An X's and O's Breakdown

Share All sharing options for: Michigan State vs. Oregon: An X's and O's Breakdown

This year's version of "The Immovable Object v. The Unstoppable Force" took place this past Saturday, except as it turns out, the object was fairly easily moved. Well, at least in the second half. Oregon took down Michigan State and their vaunted defense featuring the "No Fly Zone" Saturday to the tune of 46-27, after the Ducks overcame a halftime deficit to defeat the Spartans. Let's look at how the Ducks were able to confuse and disrupt Michigan State's defense.

Oregon's second touchdown of the day - and the first big play of the game for the Ducks - came by way of a beautiful Marcus Mariota-to-Devon Allen connection. At first glance, it seems very apparent that the Michigan State safety, Kurtis Drummond (27), crashed in too early thinking run, before realizing his error and attempting to play "catch up to Devon Allen," a game no one in the world fancies playing. This blown coverage, however, was not Drummond's fault.

Michigan State came out in their usual 4-3 Over look, which they very rarely deviate from. Oregon matched this look with a 2 wide, 1 TE, 2 RB set. Instead of having both backs begin the play in the backfield, Byron Marshall began the play split out and motioned in before the snap. 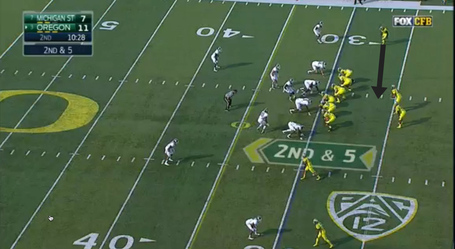 Mariota ran a play action, read-option look with the back, Royce Freeman, with the other back coming in from the right running across the face of the option. The interesting part of this sequence though is the Michigan State defense.

On this play the Spartans blitzed all three of their linebackers, meaning they sent seven men after Mariota - in other words an extremely aggressive blitz. In order to still be able to cover a route over the middle of the field, Drummond (circled in white) drops in to the spot vacated by the linebackers. The other three defensive backs (in red) are each responsible for a third of the field. 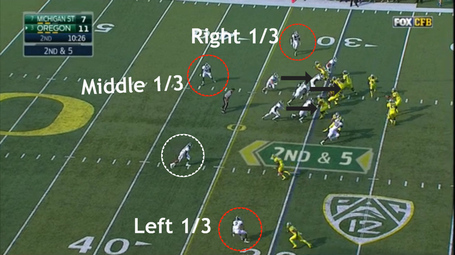 If covering a third of the field sounds like a Herculean task, it's because it sort of is. The Spartans are hoping they can get to Mariota fast enough, or at least make him take his eyes off the deep targets quick enough to prevent him from making the right throw. For example, look at Grantland's Chris B. Brown's excellent breakdown of Michigan State's defense.

The problem for the Spartans this time around is three-fold. First, the Oregon line holds up fairly well and Mariota stands tall in the pocket with his eyes down field. Secondly, the safety responsible for the deep middle third of the field hesitates slightly as Mariota runs the play action. Lastly - and every Oregon fan's favorite part - is the speed of Devon Allen. By the time Mariota releases the ball, Allen is already at the safety level of the defense. 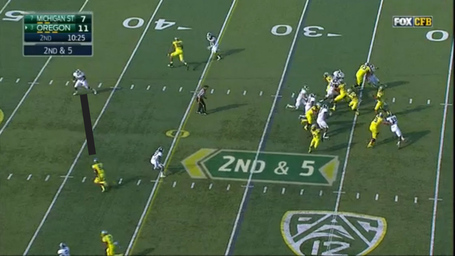 After a terrible stretch which saw the Spartans score 20 unanswered points to take a 27-18 lead, Mariota found Allen again, this time on a pick play, cutting the deficit to 27-25. Minutes later, Oregon got the ball back and Mariota found a wide open Keanon Lowe to give the Ducks the lead back for good.

Oregon lined up trips out to the left, with one tight end on the back side, a set that Michigan State matched with its usual 4-3 Over look.

As Chris Brown describes in his breakdown, the Spartans run a sort of man-zone hybrid in its secondary, which require everyone to make the correct reads. The cornerbacks press, and have a decision to make based on the route the receiver is running. If it is a short route, the corner usually lets the receiver go, knowing a linebacker will be there to pick up any underneath route. So when the ball is snapped, the defensive backs labeled 1 and 2 are pressing the receivers they are lined up across from, with the safeties taking the two deep zones once they know a run isn't coming. 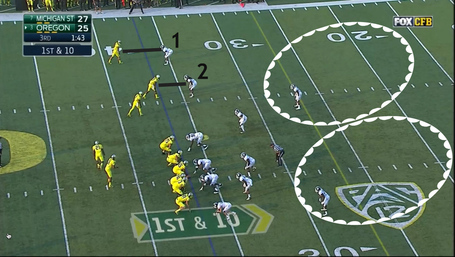 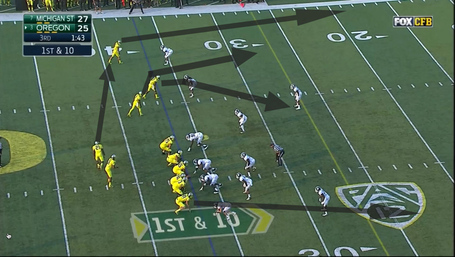 The 2 corner presses Carrington as he runs his route, and releases him into the linebackers as instructed. 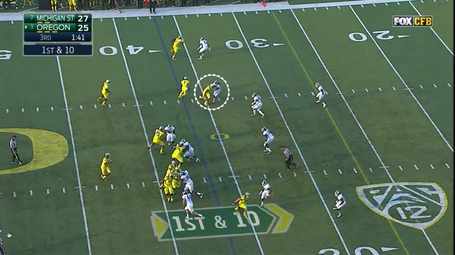 After he releases Carrington the number 2 corner attempts to catch up to Lowe, who has a few steps on him after the crossing route action. While the corner is playing catch up, the safety is left between a rock and a hard place. He can either help out the laboring corner or pick up Carrington who is running a fly route down the middle of the field. Either way, a receiver is wide open down field. 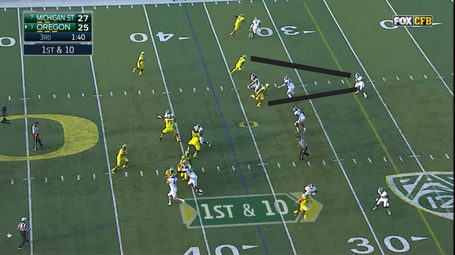 The safety decides to pick up Carrington, leaving Lowe wide open for the go ahead score.

The last play is less of a tactical breakdown and more of a marvel of unbelievable athleticism.

NOTHING IN THAT VIDEO MAKES ANY PHYSICAL SENSE IN THE REAL WORLD WHERE PEOPLE LIVE.

I'm about to go full John Brenkus/Sport Science mode here, so bear with me. When the ball is tipped, Ifo is at the 15-yard line and his momentum is taking him towards the middle of the field. 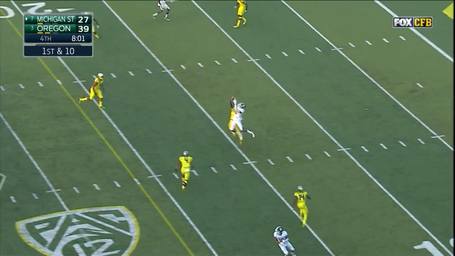 According to my rough estimation, it took about 1.45 seconds from the time the ball is tipped to Ifo making the interception. Oh, and he made it at the 5-yard line. Think about that for a second. He was able to change his direction and make up ten yards in less than a second and a half, and then make a diving catch to put the game on ice. 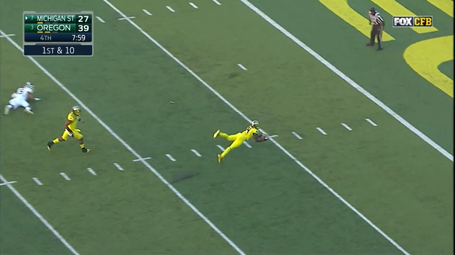